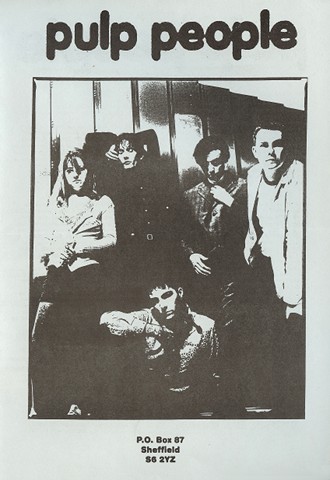 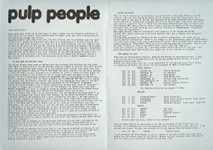 Many greetings! Sorry we've been away so long... summer has had isolated incidents of Pulp activity but there's been nothing much to report until now. We're coming back at you before you forget who we are.

Despite constant hard work from Alex, the fan club has had its problems over the past few months, I guess the president must take full responsibility. We have renewed our vows to you and have decided it is time for us to move headfirst into the computer age so that we can give you the special personal attention we know you deserve. We've spent a lot of time on re-organisation and hope that now we have it more together. Membership is constantly expanding and with band business now taking place all over the world it's been hard for us to keep it all under control. We owe most apologies to recent new members for whom we haven't been able to provide full membership packages. Before I get into what's different now, I'll bring you up to date on what's happened since I last wrote.

IT HAS BEEN AN EXCITING TIME

The UK and French tours back in Spring were big successes and everyone was overjoyed when "His 'n' Hers" entered the UK national chart at number 9. We were even more excited when "The Sisters EP" made number 19 in the singles chart because that meant that the long awaited dream of Pulp on "Top Of The Pops" was now a reality. In the early morning of June 2nd 1994, we were playing live on French TV, after a couple of hours sleep the group were whisked to the airport to fly to London and taken straight to the TOTP studio. Due to a technicians strike the programme was a live broadcast so Jarvis was able to surprise us all with the silky knickers and "I HATE WET WET WET" written inside his jacket. The performance offended some people and complaints were made to the BBC ! A fabricated explanation from Jarvis was broadcast on the "Biteback" programme. During the tours we made a few in-store appearances playing short sets of "acoustic" versions of songs, and recorded a short set for Channel 4's "Naked City" and "Butt Naked" programmes in front an audience chosen at random from fans at the London Forum concert. Some of the songs were edited for broadcast, don't ask us why.

Whilst in France there were two TV appearences - "Do You Remember The"First Time ?" on "Le Plein De Super" and "First Time" and "Babies" on "Le Cercle De Minuit" (there was a Russell clone in the audience and a stage invasion at the end !). We also played a live acoustic session on "Europe 1" radio featuring "First Time" and a version of the Velvet Underground song "Femme Fatale", we didn't have the lyrics so Jarvis made some up. After a few days rest from the French tour we all flew out to Stockholm, and then Amsterdam, for one-off concerts on June 7th and 9th. The next show was at Glastonbury on June 26th - we had some problems and it was a pretty poor performance. Two songs were broadcast by Channel 4 television and most of our set was later played on John Peel's radio show. (Can anyone send me a tape of this ?). Look out for more of Pulp at Glastonbury on TV towards the end of the year.

On July 2nd, Jarvis was back at the BBC for a stunning performance on "Pop Quiz". He single-handedly took his team to victory in such style that Chesney Hawkes bowed saying "We're not worthy" !

Next up was a set in Belgium at the Dour Music Festival on July 10th, followed by our appearence at "T In The Park" in Strathclyde Park, Scotland. "Razzmatazz" and an interview from this day were shown as part of Scottish Television's coverage of the festival.

The film of "Do You Remember The First Time ?" was finally broadcast by Channel 4, but in their own edited version and much was missing, it was out of our control. MTV have bought the tape so maybe they will show it in full sometime in the future.

At the end of August Jarvis and Steve flew over to America for a brief promotional tour of interviews, and we ended summer with an appearence on the main stage at the Reading Festival on August 27th.

"His 'n' Hers" should now be available the world over in the same format as the UK version, with the only exception being the US release which has "Razzmatazz" as a hidden track at the end of the CD. The Japanese CD has some different outer packaging. Island Records in France have released two limited edition CDs - the first came free with initial copies of "His 'n' Hers" and contained "Seconds" and "His 'n' Hers" from "The Sisters EP". More recently there's been a special CD single of "Do You Remember The First Time ?" which contains live acoustic versions of "Razzmatazz", "Joyriders" and "Dogs Are Everywhere".

That same acoustic take of "Joyriders" also appeared on the double LP and CD "Volume 10", which comes with a CD sized magazine that has a lengthy and interested Pulp article.

Fire Records released the "Masters Of The Universe" compilation, but chose not to include Jarvis' sleevenotes. (They'll now appear in the forthcoming issue of DISCO-VERY.) Fire also have a mail-order only compilation CD called "Fire Is Good" which includes the single version of "Countdown". They are still offering some back catalogue items so you may want to write to them at 21a Maury Road, London, Nl6 7BP, England.

There are currently no plans for a new Pulp record before the end of this year. The group have spent some time writing new songs, but as yet nothing is recorded.

THE RETURN OF PULP

Pulp will be touring North America, England and France in September/October. I know a lot of you will be disappointed that we are not going further afield, it's not because we don't want to.

Before the tours there will be a live appearence at the Mercury Music Prize Awards in London on September 13th which will be broadcast by BBC2's "Late Show".

Please check the music press for any changes.

There is some talk of us returning to the USA in November if the first tour is a success. It's unlikely we'll be visiting any other countries this year. However, I can exclusively reveal the date and location of a very special Pulp Christmas event :-

I have arranged for Pulp People to have a chance to purchase tickets for this show before the box office opens to the public. Please use the enclosed order form and be sure to return it to us before Friday 7th October, 1994.

From now on, we intend to send you a newsletter at regular two monthly intervals. It will be larger and have a new format. I hope it will be more of a small fanzine than a report, including more photos, articles, etc. There'll be a diary of Pulp activities over the past two months and a random prize draw with five winners each receiving a parcel of Pulp goodies. We could expand the Pen Pals section to include longer ads for friends and swaps, and we welcome your contributions and ideas.

The next newsletter should (at last) be accompanied by a new edition of DISCO-VERY magazine. It's been such a long time coming, and to make up for the delay we will also be sending you a free supplement - Volume One of the Pulp Scrapbook, which contains press cuttings, flyers and photos from the very beginning through to "Separations".

Please state your preference and alternatives, if your choice is not available we will send the most similar unless you specifically request a refund. Cheques/POs should be made payable to 'Pulp'. Please understand we can only accept French francs in cash.

Write to these people ! I'm sure they're all very nice...
[nine names and addresses]

Yannick would like to meet people to swop tapes and videos. Lorna would especially like to make friends in the London area. Jerome wants girls aged 15-18 (don't we all!). Lourance wants friends in London, Leeds and Sheffield.

If you would like to place an ad in the next newsletter then please write to us soon.

Well, I guess that's all our news... what's yours ? Do keep on writing to us, it makes it all worthwhile. We love you all.

P.S. Here is a special gift - an exclusive photograph of Pulp by Mondino. It was taken in Paris last May for "Glamour" magazine.