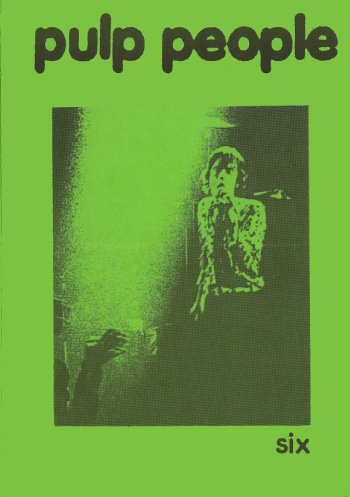 Pulp People fanclub newsletter six was written by Mark Webber in May 1993.

A special gift was sent out with this newsletter - a piece of Jarvis' trousers! Each piece was sent in an individually numbered envelope.

Hello again, I hope you're all doing fine, all is well at Pulp Command Centre. This newsletter is mainly to let you know that there won't be much Pulp Action through the summer and to explain why...but there are a few things happening, starting with a just confirmed show in London.

There won't be many concerts because we're hard at work preparing to record an album. The group have been writing some great new songs, and recording will start soon. If all goes to plan, Pulp will return with a new single in September and the LP in October, together with tours of the UK and France...and that's just for starters ! As official Pulp People, you can be sure you'll be the first to receive full information on these events.

As there's not much new news, I'll start by telling you what's been happening since February...The Pulp/St Etienne tour was a success with sell out shows all over. I know many of you had trouble getting tickets, we're sorry about that but all we can do is say "Buy early in future".....Our next concert was a benefit for Shelter at London ULU (this was a late-confirmation so we didn't have time to let you know).....Meanwhile, the "Razzmatazz" single was in the indie top 5, and became the first Pulp record to make the UK Top 100, peaking at 80.....We played 5 songs live on the Hit The North radio show on February 17th, and the John Peel Session broadcast on March 5th featured 3 new songs ("Pink Glove" "Acrylic Afternoon" and "You're A Nightmare").....There was a tv show called The Warehouse (broadcast on 23rd April in the YTV and Tyne Tees areas) which featured 3 songs and a short interview.... We spent a few days in Ireland to record a mad tv show called JMTV Rocks The Garden (2 songs plus much chat with the band), and to play a concert in Dublin.....Then we were up in Glasgow to film a new show called "No Stilettos" which will be broadcast on BBC2 in Scotland in June/July and England in July/August. That has live versions of "Pink Glove" "59 Lyndhurst Grove" and "She's A Lady".....Finally, there was the Sheffield Sound City event which featured a live Pulp concert broadcast on Radio One. I hope it sounded okay out in radioland, the kids there seemed to enjoy it. That same day, the band did another slot for the JMTV programme (a live satellite link on which they interviewed Shonen Knife !) and there was a successful signing session at HMV records.....You may have read in the music press that we had some equiptment stolen - it was our own stupid fault for leaving it in the van overnight - bad news for sure, but it could've been a lot worse. The synthesiser was broken anyway (we played 2 concerts using one we borrowed from Stereolab), and there was a partial happy ending when Jarvis' guitar was returned to us in slightly mysterious circumstances (he was very pleased, he's had it since his 8th birthday !) but it seems that the bass and Russell's orange guitar (a staple part of the Pulp sound since 1984) are gone forever.

CONCERTS
Sat 15 May LONDON The Garage (Box Office 081 963 094-0)
This is the opening new of a new club that was formerly the T&C2 at Highbury Corner. You should buy an advance ticket to guarantee entry.

Sat 29 May OXFORD University
Sorry, but this is a closed concert for students only...there's nothing we can do.

Fri 16 July PHOENIX FESTIVAL (Box Office 081 963 0940)
Pulp will play on the Mean Fiddler Stage at 6:30pm. Of the many other bands playing this day, I can recommend Kinky Machine and God Machine.

There may be other isolated dates through summer, but we're saving ourselves for extensive touring in the Autumn.

BACK CATALOGUE LATEST
Just out on CD for the first time is the "Freaks" LP, which was recorded in 1986. If you're a recent fan then be warned that this album has a different line-up and sound to latter day Pulp. I still think it's great though ! If you want to track it down then the catalogue number is Fire CD5.

In reply to the suggestion in the last newsletter, Alex Ohlinger [...] is offering the Freaks LP, Little Girl, Dogs Are Everywhere and They Suffocate At Night 12"s and the Imminent 4 and You're Secrets Safe With Us (double) compilations for exchange. Write to him to get his list of wants and to arrange swaps. If anyone else has Pulp records to trade then write and tell me.

FAN CLUB NEWS
Enclosed with this newsletter is a special gift from Jarvis - a piece of his trousers ! All parcels are individually numbered in a limited edition of 500. and a special prize will be given to the person with number 217 (for that is the time as I write this!) Send us a photocopy of your envelope as proof and you'll be a winner.

Here are the addresses of three fans who would like to hear from other Pulp People so drop them a line and let's all be friends...
[Names and addresses given]

Let me know if you would like to be a Pulp Pen Pal too.

Pulp People has been running for about a year now, so we'd really like to know what you think of it...do you get value for money ? do you have any suggestions on how to make things better ? Please write and let me know your thoughts and ideas. Time prevents us from doing everything we think of, but we want to provide you with the best service possible.

PULP PEOPLE ARCHIVE
Another one of my little jobs is maintenance of the Pulp Archive, where I try to keep track of any related press articles, tapes or videos. There are a few items missing, so please let me know if you have any of the following.....The 1981 John Peel Session, "My Legendary Girlfriend" from Hit The North in 1991, an interview Jarvis did with Steve Lamacq on the 1FM Evening Session, and the interview with Jarvis shown on The Beat TV show. We also need a decent MW recording of the recent Hit The North session. And I'd like to hear from any Pulp People with live tapes of concerts as this area is very hard to keep track of. Thanks.

T-SHIRTS
Due to popular demand, we now have new stocks of the legendary brown Pulp t-shirts ! All are XL with front and back prints, and cost £8. If ordering from outside the UK then please add £2 for postage. French fans can send us lOOFrF but this must be in cash. We can only accept cheques and POs in pounds sterling.

Okay, that's all for this time. Remember to let us know if you change your address, and don't be surprised if you don't hear from us for a while.