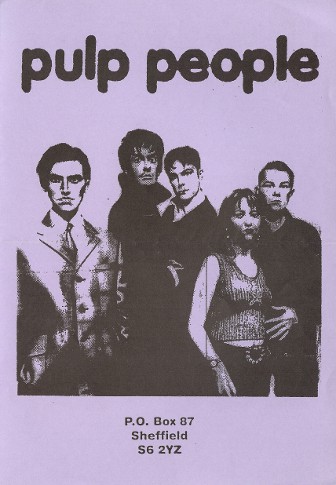 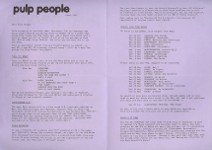 It's certainly an exciting time. Yesterday, "Do You Remember The First Time" entered the UK Top Forty at Number 33 so I guess that means Pulp really are Pop Stars now. And I guess that means that I have to thank you all on behalf of all of us for getting us this far. Now we want to go further. And we'll try our best not to let you down.

This is newsletter number nine and there's plenty to report - a new LP, a new EP, CD reissues, concert tours - it'll be a busy few months for Pulp People everywhere.

"HIS 'N' HERS"
"His 'n' Hers" is the title of the new Pulp album and it will be available from Island Records on LP, CD and Cassette from April 18th. Here's the full track listing :-

Side One
JOYRIDERS
LIPGLOSS
ACRYLIC AFTERNOONS
HAVE YOU SEEN HER LATELY ?
SHE'S A LADY

Side Two
DO YOU REMEMBER THE FIRST TIME ?
PINK GLOVE
SOMEONE LIKE THE MOON
DAVID'S LAST SUMMER

The CD and Cassette formats will include a new remix of "Babies", which was intended for the next EP but was subsequently rejected in favour of the original version.

FORTHCOMING E.P.
The next Pulp single will be a four track E.P. available sometime in May. The featured songs are "Babies", "Glass", "His 'n' Hers" and "Seconds". After much intense deliberation it was decided that "Babies" would appear here in its original form (it has that undefinable something that was somehow missing from the remix). The three other songs are the remaining tracks from the LP sessions. (Although work was started on "Live On" it was left unfinished.)

OTHER RELEASES
It was a surprise for everyone when "It" appeared on CD a few weeks ago. Apparently Cherry Red recently bought the rights to the Red-Rhino back catalogue and rush-released this, a mini-LP from 1983. This mid-priced CD also includes the b-side of the "My Lighthouse" 7" and the tracks from the "Everybody's Problem" single.

The news from France is that the Michel Polnareff tribute LP "Holidays" has been temporarily delayed due to some legal problems but it will be released in a few months. Pulp's contribution, "Le Roi Des Fourmis", recently made its live debut as part of our Paris "Black Session".

Also coming soon is "Masters Of The Universe", Fire Records' CD compilation of singles tracks from 1985-87.

French dates in late May. Support to be confirmed.

We expect to play more continental dates through summer and in June hope to make our first short visit to the USA, but that's not confirmed yet. Only one more show is confirmed at the moment :-

Be sure to buy your tickets early as many shows are expected to sell out quickly and we'd hate for you to be disappointed.

RADIO & TV NEWS
The "Do You Remember The First Time ?" film will be broadcast as part of Channel 4's "Late Licence" one Saturday night in April. The film premiere at the ICA on March 9th was a big success, and it subsequently made a short tour, showing in Sheffield, Birmingham, Manchester, Glasgow and Newcastle. These previews were promotional evenings for the media and as they took place in small venues, I'm afraid I wasn't allowed to tell you in advance. (Though it was good that some real fans did attend after Jarvis let the dates slip out during his interview on the Mark Radcliffe Show.)

Pulp are set to record a session for 1FM's John Peel Show on April 10th. This session will hopefully preview some new songs so be sure to listen out for broadcast in late April/early May.

Throughout March "The Beat" TV programme broadcast a total of seven live Pulp tracks from the January Astoria concert. The songs were "Lipgloss", "Joyriders", "Have You Seen Her Lately ?", "Acrylic Afternoons", "Pink Glove", "His 'n' Hers" and "Do You Remember The First Time ?". Unfortunately most were savagely edited.

On March 15th, we journeyed to Paris to play live for a second time on France Inter's "Black Session" radio show. Apparently there was such a demand for tickets that there was fighting in record stores when they were made available ! For the first time in two years, the programme organisers sought special permission from the Radio France bosses to exceed the capacity of the small studio theatre. So there was a great atmosphere throughout the 45 minute set that was broadcast live all over France.

On March 22nd, there was a new experience for everyone when Pulp played semi-acoustically on GLR Radio (in London only) and on MTV's "Most Wanted" show. Until now, the group had resisted all attempts to catch them unplugged, but everyone is pleased with the results and similar appearances are very likely. On GLR we played "Joyriders" and "Dogs Are Everywhere" (an old song from 1986) and the MTV show featured "Babies" and "Acrylic Afternoons". For both sessions the group was joined by Yvette Lacy on flute.

PULP PEN PALS
Here are some more Pulp People on the lookout for new friends...
[...]

So that's everything. Hope you like the new records and look forward to seeing you during the tour. I have to go to rehearsal now.