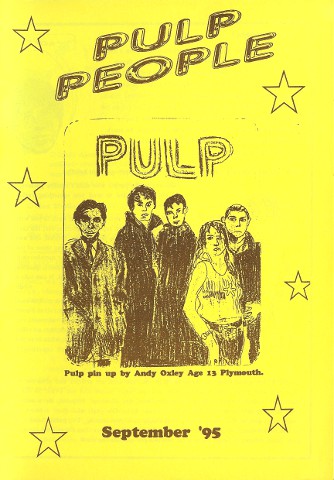 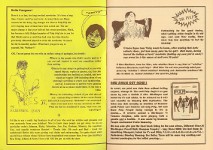 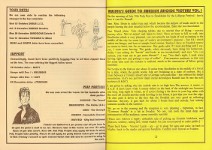 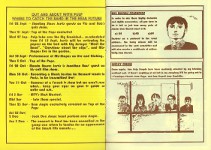 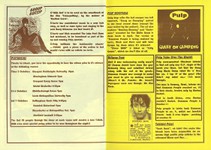 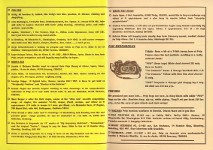 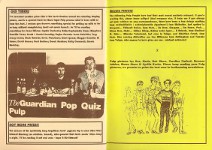 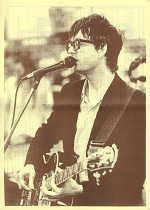 Here it is at last, the long awaited newsletter. It's been a long time, I know, and I'm real sorry. As usual there are flimsy reasons for the delay; big changes are afoot at Pulp HQ but we're hoping most of them have been sorted out. The one major change is that your beloved but errant president, Mark, has become a fully fledged member of Pulp (big kiss to you for that Mark) and as a result has had even less time than he previously allocated himself to write the newsletter. So much for the bi-monthly update. What have you got to say to yourself, Mr. Webber??

OK I'm not gonna hit you with an endless string of apologies, but briefly: 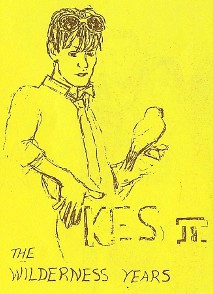 I'd like to say a really big thankyou to all of you who send me articles and presents and even postcards from your holidays! Nice to know some people can get away. So (in no particular order) Johanna, Ricky, Sebastian, Jess, Em, Graham, Momtaz, the wondrous Guy, and equally wondrous Raechel - Thanks kids. Oh yeah and Boel - loved the toothbrush! Before this starts getting real slushy and embarrassing, I've gotta thank some special boys without whom I'd have been hospitalised even sooner than I was (just kidding). Ben, Doug, Johnny & Scott, I love y'all. OK lets get on with the show.

Fortunately for the good doctor, who's getting rather fragile in his old age, and now tires easily, there were very few questions to test his memory:

Sonia Ayme from Vichy wants to know, after reading that Jarvis collects shoes, just how many pairs has he got?
Well Sonia, having braved the bottom of Jarvis' wardrobe (holding my nose just in case) I can reveal he is the owner of well over 30 pairs!

Alex Martinez, from Les Lilas, asks whether there is any kind of "relation" between Menswear and Pulp?
Well Alex I'm not sure precisely what you mean by "relation": blood relation? Certainly not. Amicable relations? We like to think so. Sexual relations? You must be joking.

As usual, we print one date then without telling anyone, change it. The next Pulp single is as you know by now a double A side. Mis-Shapes and Sorted for E's and Whizz to be released on 2 cd's and cassette on Monday 25th September. The video was shot recently on location at Hammersmith Palais and features not only Pulp, but also those Pulp People lucky enough to live in London... It revolves around a Mis-Shapes Vs Townies storyline, with Jarvis playing both a goodie and a baddie. It was made by Common People mastermind Pedro Romanhy.

We can now give you the final track listing for the new album, Different Class. A) Mis-Shapes; Pencil Skirt; Common People; I - Spy; Disco 2000; Live Bed Show; B) Something Changed; Sorted for E's and Wizz; [[FCL; Underwear; Monday Morning; Bar Italia; There will be some very exiciting and unusual packaging for the initial pressings....

We are now able to confirm the following changes to the tour schedule:

SUPPORT
Unsurprisingly, bands have been positively begging Pulp to let them support them on the tour. The ones offering the biggest bribes were:

PULP PARTIES!
We can now reveal the venues for the fantastic after show parties:

Tickets are limited to 2 per person and all you have to do for yours is send us an sae. Because some of the venues are over 18's only, those of you who aren't, dress old. Non Pulp People may apply but bear in mind Pulp People take priority. Please do not apply for party tickets unless you are going to that evening's concert as your concert ticket stub will also be needed [for] entry to the club 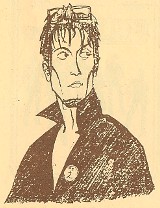 On the morning of July 30th Pulp flew to Stockholm for the Lollipop Festival - here's how it was for Russell...

5am. Rise. Dress in safari type suit which became the subject of much mirth to the people leaving the club situated below the accommodation. Enter the taxi humiliated.

7am. Board plane. Take sleeping tablets due to morbid fear of flying - survive journey alive. Met at airport and taken to hotel. Have an hour to kill so walk into Stockholm which is very pleasant, you can actually see loads of cod swimming in the middle of the city (in some type of watery environment I presume - fish Ed.) which makes me hungry and keen to sample local cuisine. Realise I have no Swedish money so return to hotel, late for an interview. Our guide asks if I need anything and I say, yes, I want some herring; The guide, who's obviously been doing his homework, thinks I am asking for "heroin" and looks at me incredulously and says "Are you serious, you want me to get some Heroin?". I say "Yes that's right, I need some herring right now and perhaps a cup of coffee"... Conversation continues in this vein for some time until the mistake is realised, much to the amusement of fellow group members.

I am given to asking why the suicide rate is so high here.The answer, it seems, is S.A.D. (I don't know what it means either) so the land of the midnight sun becomes one long, long night in winter, so if you're feeling a bit down in your log cabin with the snow all around and the trolls howling in the forest, it just tips you over the edge. He also puts it down to the fact that the Swedish are very good at collecting statistics. Anyway, it gets dark for about 2 hours here and nobody, but nobody commits suicide in the summer.

We go on in the evening and the reception is very pleasing - rapturous, in fact. "Common People" is a hit in Sweden. No one, not even the most deep and introspective of the audience, seems remotely suicidal.

Plane back home - Vooom! Lands - ace - go to sleep for ages and wake up back in blighty, back to the studio and general boredom. Confirm next festival in Sweden.

In order to win these highly desirable and stylish accessories, all you have to do is tell us just how many pairs of shades does Russell own? Is it:
a) 24   b) 40   c) 69

Answers on a postcard to the usual address.. the lucky winner will be announced in the next newsletter and will also receive a certificate of authenticity from Russell. 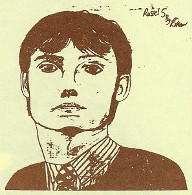 Lucky Draw
Once again, two Pulp People have been randomly selected by my fetching assistant and if there's anything at all left in my swagbag it'll be going out to: Veronique Pierret from Liege and Sam Capell from Coalville. 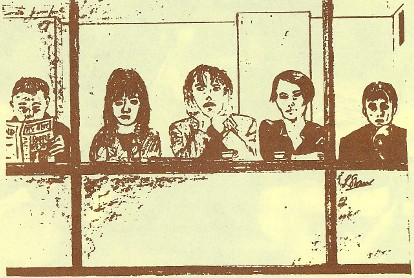 PLAYBACKS
Thanks to Island, you have the opportunity to hear the album prior to it's release at the following venues:

The first 50 people through the doors of each venue will receive a free T-Shirt. With even more special pulpy prizes to be won throughout the night!!

Only days after the last camper van left Somerset, "Carry on Camping" arrived in our local record stores (except the ones raided by the police!). The cd also features "Monday Morning" and "Underwear" recorded for The White Room tv show back in April. The version of "Common People" is being remixed by Jarvis, Mark and Steve and will take Europe by storm when it's released.
"Disco 2000" is listed as "Fully Grown", which we don't like at all.

Well it was embarrassing really wasn't it? Damon should have done the gentlemanly thing and admitted defeat along with the rest of the guests. Common People was enough to make you want to give up making records (Wasn't it Mr. Powder, Mr. Gene?) Supergrass were ace though. We like them.

Pulp Take Over The World!

Pulp correspondent Charlene informs us that not only was C.P. single of the week over there, but that the Hong Kong Music Union voted His 'n' Hers the no. 3 top LP of the year! (She didn't say what no.s 1&2 were though).

Our man in Norway, Remi, informs me that Common People reached no. 10 in their charts, beaten only by Morton Harket.

And in South Africa, even Morton couldn't Harket. Common People is number 1!

Pulp people in Latvia took Common People to no. 9, whilst our Swedish friends took it even higher - peaking at number 4!

Tabloid Pulp
"Geek Rook", eh kids? Our snake like friends have been responsible for numerous high profile Pulp articles in the esteemed Mirror and Star...

T-shirts - Been s bit of a T-shirt frenzy here at Pulp Towers since the last mailout, resulting in a vastly reduced stock:

Pulp Bags
We promised you more info... Pulp bags are here, in shiny black with white "PULP" logo on the side. Shoulder strap, zip up, white piping. They'll set you back £20 inc p+p, so be the envy of your friends and start saving !

Fanzines: Pulp fanzines continue to flourish. Check these out if you like:

I've invented another prize: this is the Jarvis Cocker award for unfading staying power, and is a special treat for those loyal Pulp persons who've been with us from the start. I reckon you deserve something special for putting up with us for so long without complaining (well not much Jason!). So I'll be sending something to: Susan Wilson; Sophie Darbeda; Kelly Anyfantaki; Dawn Blagdon; Camille Tovar; Sarah + Gerald Garretty; Zeyka Cernok; Jason Antcliffe; Tag; Jenny Senior; Mark Roberts; Kevin Pickstock; Brent Lynam; Maggie Kemble; M Howe; David Horner; Paul Holden; Derek Hawkes; Kelly Cornwall; Nicola Buckley. 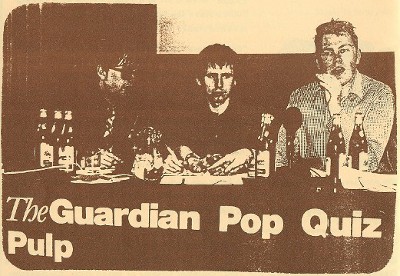 The winner of the (probably long forgotten) Jarvis' pyjama top is none other than Edward Mackey (no relation, honest), who guessed that Jarvis needs 10hrs sleep a night. I'll be sending it out real soon - hope it fits Edward!

The following Pulp People have had their most recent mailouts returned. If your'e reading this, phone home willya? (And everyone else, it helps me if yon always put your address on any correspondence, there have been a few delays resulting from unidentifiable / undecipherable signatures!)
[list of names] 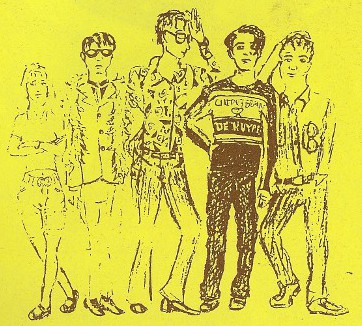