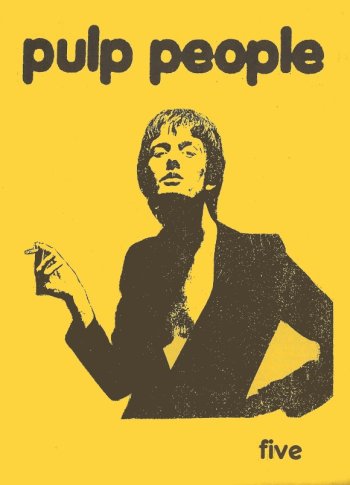 It's certainly an exciting time here at Pulp Central, everything is coming together and RAZZMATAZZ IS NOW ! Everyone's hard at work because we know this could be the one.

"RAZZMATAZZ" IS RELEASED ON MONDAY 15th FEBRUARY !!!
It's a 12" and CD on Gift Records, numbered GIF6(CD) and distributed to all good record stores by RTM. (It'd be really great if you ordered your copy now and bought it in the first week from a suspected chart return shop!) The record will only be released in the UK, so our European friends will again have to try and get import copies. (Sorry again...this should be the last time this happens). Along with the pop masterpiece on the A-side, you'll also be able to dig "Inside Susan...A Story In Three Songs", a mini pop opera following Susan from her teen years to middle age. It's a winner !

THE RAZZMATAZZ VIDEO
Following on from the success of the "Babies" promo, the new video is again directed by Jarvis and produced by Steve. It was filmed over a hectic few days around our Nantes concert, including some footage from the concert itself, plus scenes out in the streets of the seedy Paris Pigalle area, a Paris hotel once frequented by Jacques Brel, and at "Sunset Strip" - the original 'gentleman's club' in London's Soho !

PULP ON TOUR WITH ST ETIENNE
Yup, we've joined together with Bob, Pete and Sarah to bring our entertaining and pop packed night out to 10 venues around the UK.

Pulp will probably be onstage quite early each night, except London which is a late starter (onstage 11:30pm).
Guest dj's at the Glasgow show are Stephen and Katrina of the Pastels.

PULP TV & RADIO
THE BEAT (late night pop show with Gary Crowley).- "Babies", "Sheffield Sex City" and an interview to be broadcast in the London area on Monday 15th Feb., and around the ITV regions that week. This show broadcast "Razzmatazz" 'by accident' on Feb 1st, which meant that we were no longer able to do THE WORD. (Can you believe it ?) The three songs were recorded with live vocals at the Astoria Theatre, and we'd like to thank the Wicker Players (Dylan, Jackie, Kim, Chris and Andrew) for helping out.

HIT THE NORTH - Pulp are to play their second session for Mark Radcliffe's Radio Five programme. There'll be five songs plus an interview broadcast live on Wednesday 17th February at 10:10pm. (909 or 693 kHz on MW)

Also...The "Razzmatazz" video should be premiered on THE ITV CHART SHOW on Saturday 20th February...and then shown on MTV's 120 MINUTES the next day, together with an interview with Jarvis. These two dates are unconfirmed so stay tuned to your sets.

CAFF RECORD LATEST
All of you that sent for the Pulp Caff single should have it by now, but any of you that are still waiting should send us your address and we'll pass on the complaint. Bob's notes on the insert are a little misleading - "My Legendary Girlfriend" was recorded at Radio Manchester during the soundcheck for the last Hit The North session on 11.9.91. "Sickly Grin" is from a 1982 demo, and "Back In LA" is from a 1984 demo (before "Freaks" and "Little Girl").

If you still haven't ordered your copy, send a cheque or PO for £3.00 to Caff Records, 100 Barnsbury Road, London, Nl 0E5, England. This record is not available from Pulp People, and is limited to one per person.

BACK CATALOGUE
A couple of Pulp People have suggested ways of collecting old Pulp releases - Mike Cluley suggests that you all buy any Pulp records you see and then offer them for sale or exchange here in the newsletter. I think this is a good idea and will help do this, so send details of your swops or sales to us, but please don't ask any excessive prices.

Alex Ohlinger of Germany tells me that Rhythm Records of 12 Gwydir Street, Cambridge, CB1 2LL, England helped him obtain nearly all the back catalogue, so you could try them.

EURO-PULP NEWS
Since last time, we've had two more very enjoyable trips to France - in December we went to Paris to celebrate the opening of the Rough Trade Shop - quite a hectic show with Huggy Bear, Colm and Moonshake - and then in January we filmed for the "Razzmatazz" video in Paris and then travelled to Nantes to play a great concert with Suede. Special thanks to Jean-Baptiste, Aude, Daniel et Christophe for helping us and making us feel so welcome.

As there are now so many Pulp People in France, it's no longer possible for us to offer you all free tickets, but we will try and keep about five pairs of tickets for the first few of you that write in before each concert.

T-SHIRTS
The new shirts are now available, and feature the Pulp Arrow Logo from the Razzmatazz sleeve. This is printed in Red and Orange on a variety of backgrounds. Shirt colours are purple, turquoise, royal blue, white, and jade. All colours are in short supply so list alternatives if you order. Long sleeves are £10, short sleeves are £8. P&P is free to fan club members. We are now able to accept French Francs (in cash only) - manches longues sont 120f et manches court sont lOOf. We still have a few brown 'super stars' L shirts at £8 and blue 'star' XL at £10. Please make cheques or POs payable to 'Pulp'.

OTHER NEWS
..."Babies" spent an astonishing 16 weeks on the NME chart !!! Let's hope "Razzmatazz" makes it onto the big one...You should have noticed by now that early copies of DISCO-VERY had a mistake on the answers to the questionnaire - it should read C-Jarvis D-Candida - Jarvis would like to make it clear that he does not fancy a date with Julian Clary !...Listen out for a special 'sanitised' version of "Razzamatazz" on those radio and tv shows that can't stand the heat...As the next newsletter will be number 6, that means that some of you will soon have to think about renewing your membership - we'd hate to lose any of you and hope that you don't want to miss out on the goodies we have planned for the future. Our New Years Resolution is to send out a special free gift with every third mailout.

That's all for now - we hope you all like the new record (it's with love from Pulp to you). See you someway along the tour. Be more Pulp in 1993 and remember things go better with a little bit of Razzmatazz !

LATEST: Pulp St. Malo concert in March is cancelled/ "Razzamatazz" video may be shown on "The Word: Access All Areas" on Channel 4 / Pulp to record session for the John Peel show - listen out for broadcast on 1FM in late Feb./early March.