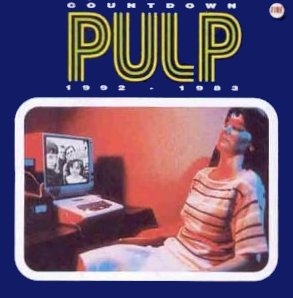 Note: on the double LP, Death Goes To The Disco appears as the second to last track, between Blue Girls and the extended version of Countdown.

I would urge anybody not to buy it. Please, I find it embarrassing to be honest. And also the way it's packaged to look a bit modern, a bit like our sleeves now. It's a crap version... I wouldn't recommend it to anybody. And Fire records never did us any favours when we were on the label. Being signed to that label was the single biggest thing that prevented us succeeding. It almost made us split up.

So there I was, at a party in one of the flats upstairs from mine on a South London council estate. It was around midnight on a Saturday in late November, 1992, and the joint was teeming with waiflets from the nearby Camberwell college of Art. The hipper ones were sitting on the living room floor, wobbling their heads to the 'shoegazing' records of Ride, then in their first (and, it turned out, only) flush of popularity. A more pathetic bunch was slumped around the kitchen, looking neglected. One of them stood out from the rest. It wasn't just his excessive height and skinniness, it was the brown corduroy flares.

I recognized him - Jarvis Cocker, singer with no-hopers Pulp and minor Camberwell celebrity. You'd sometimes see him at Seymours Brothers' Italian cafe, or at the charity shops, rummaging through the 70's crushed velvet jackets even the tramps had scorned. He rode a bicycle.

Pulp had been around for years, releasing a bunch of singles and albums along the way, and were well established on the club circuit. But that was as far as it went. Though people who saw their gigs raved about their fabulously cheesy glam-rock and Cocker's charisma, no-one expected them to get much bigger - they were just too unfashionable. They weren't dancey or political; they didn't explore the outer limits of feedback - hence, through the 80's and 90's, fame had passed them by. Of course, Jarvis's sartorial indiscretions hadn't helped.

Anyway, felling sorry for him as he loomed above the punch bowl at the party, I began chatting with him. Soft-spoken, owlish behind nerdy NHS glasses, he talked about broken bones - it seemed he'd once shattered his ankle, wrist and hip falling out of a window while trying to impress a girl. I decided I liked him - enough, at least, to invite him to see Shakin' Stevens whom I was reviewing the following week. I figured that if anyone would be able to see the irony in Shaky, Cocker would. He accepted, but didn't ring.

Four months later, we met at Seymour Brothers. In the interim, something had happened to British Pop. Bands like Suede and Saint Etienne had begun to be described as a vanguard of a new movement. Their songs were deeply melodic and carefully structured, qualities that had been swept away by dance music in the preceding five years. Ye Olde British Pop Song seemed too be on the verge of a comeback. I was writing a piece on it for The Guardian, and decided to interview Cocker, because Pulp were one of the bands associated with this new trend. Jarvis turned up on a bike - very pop star - and was asked for his autograph in the caff. Something was definitely happening. Incidentally, he never explained why he hadn't rung about Shaky.

April 1994... I was covering Radio 1's Sound City week in Glasgow, and ran into Pulp, who were headlining one of the gigs. Their popularity had steadily grown in the past year, and by now they regularly featured in the music press and on pop TV shows. The burgeoning Britpop scene (as it was not yet known) was still dominated by Suede (Blur and Oasis hadn't quite taken over the world), but Pulp were strong contenders. The month before, they'd released Do You Remember The First Time?, a typically Jarvisean tale of virginity-loss with a frothy chorus, which was on the way to becoming their first hit single. His 'n' Hers, their first album for major label Island, was imminent.

'It'll probably go Top 20,' I ventured. 'I hope so,' Jarvis replied, dolefully, perhaps thinking of the four albums Pulp had released between 1983 and 1992 that had barely troubled the charts. In the event His 'n' Hers reached number 9.

The last time I met Jarvis was June, 1995, at Blur's Mile End Stadium concert. Blur had become massive, and so had Pulp. The single Common People had made number two, beating Michael Jackson - much to the group's (and everyone else's) disbelief. Jarvis was holding court backstage; a steady stream of acquaintances slouched up to greet him, ignoring other VIPs like Chrissie Hynde and Joe Strummer. Cocker looked much as he had at my neighbour's party two and a half years before - even the trousers were unpleasantly familiar - but, this time he was talking about Pulp's impending Glastonbury show. They'd been asked to step in when the headlining Stone Roses pulled out; Pulp had become that big. 'How'd you manage it at such short notice?'; Jarvis was asked. 'Oh, we're always available,' he deadpanned. 'We're in the yellow pages - if you need a band to headline your festival, call us.'

Glastonbury was a triumph. most of the festival's 80,000 festees crammed onto the hillside on the Saturday night to watch Jarvis preen, squeal, do the finger-pointing dance that was becoming his trademark. He'd removed his spectacles for the occasion. The man was every inch a star.

You probably know the rest. In October if that year, the Different Class LP was released, and went into the chart at number one. It was unanimously proclaimed a masterpiece, and headed any number of magazines' year end polls. Similarly, Common People, a story of class differences bound up in a deceptively bubbly guitar line, was many critics' favourite single of year. Jarvis turned up on magazine covers everywhere in his new guise as hot sex symbol (for which he seems to have acquired contact lenses), and was lauded as one of the great English pop songwriters - justly I'd say. And Pulp finished 1995 as Britain's official Best-Loved Band - Pulp, who, a couple of years ago, had seemed doomed to live out their days as also-rans.

One of the reasons they're regarded with so much affection is that it took them so long to make it. They date back to 1978 when Cocker was a fifteen year-old Sheffield schoolboy. 'I'd always wanted to be in a group - I'd walk around school imagining I was in one,' he once said. The name he chose for his group was Arabacus Pulp; history does not record why, or even when they dropped the first word. The original lineup, apart from our man, was Mark Swift on drums, Peter Dalton on guitar and a bassist called Fungus. Their first gig was at the Rotherham Arts Centre, circa 1980, where their set - Jarvis was into Echo And The Bunnymen and The Teardrop Explodes - failed to enchant the crowd.

Band membership had already changed several times between formation and their first gigs, and continued to do so. People came and went. One bassist was sacked because he wanted to lie down (onstage) between numbers, while Dalton's father forced him - by dint of throwing a plate of food at him - to quit and go to university. Simon Hinkler, later of The Mission, played keyboards for a while. Today's Pulp - Jarvis, keyboardist Candida Doyle, guitarists Russell Senior and Mark Webber, bass player Steve Mackey and drummer Nick Banks (nephew of footballer Gordon) - didn't materialise until mid-1994.

In the meantime, they got their first John Peel session, for which they used homemade equipment, had their first bit of press (in Melody Maker) and had their first record release, a track called What Do You Say? which appeared on an indie compilation.

The first mini-album, 'It' came out on Red Rhino Records in April, 1983. The quiet, almost acoustic, music was a far cry from what was to come, but Jarvis' dramatic-verging-on-lugubrious singing style was already well-developed. That's his sister, Saskia, singing back up on the lovely Blue Girls (which appears here with two other It numbers, My Lighthouse and Wishful Thinking).

Several singles followed; tracks featured and included here are Little Girl (With Blue Eyes) (which, says Jarvis, is about his mother, who had to give up college and get married when she became pregnant with him), Blue Glow, Dogs Are Everywhere and Mark Of The Devil.

The next album, Freaks (on Fire Records), didn't appear till 1987. Its, well, freakish content (songs about fairground sideshows and being pursued by murderous villains) was quite some progression. Being Followed Home evokes the terror of walking alone down the streets of a seaside town, menacing footsteps close behind. Equally dramatic are I Want You, Master Of The Universe, Don't You Know and They Suffocate At Night.

Though Freaks met with critical acclaim, the public were vastly indifferent. Hence in 1988 Cocker moved to London to do a film course at St Martin's School of Art, and didn't get around to the next album, Separations, until 1992. By this time. Pulp had arrived at the sound we recognize today, ie, sleek and sexy, yet dominated by Jarvis's mock-Barry White croon. The single My Legendary Girlfriend was almost a hit, making number 23 on the NME's Best Singles of the Year poll. Yet Pulp weren't quite there, and they'd hovered at the edge of 'there' for so long, they were becoming discouraged. But dawn was about to break...