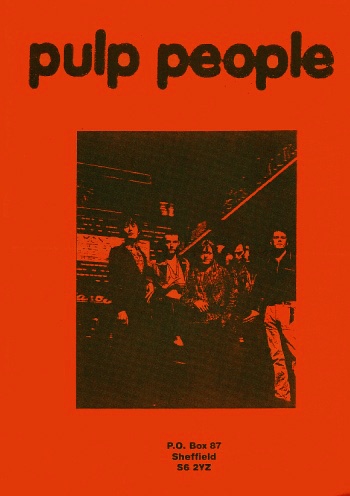 I know we've been away for quite a while, but now we're back and here we are staying ! The group spent their summer writing tons of great new songs and working on new records, which will be appearing thick and fast in the next few months. After a lengthy and elaborate courtship ritual, Pulp have now signed with Island Records, so there'll be no more holding back.

PULP INTRO - THE GIFT RECORDINGS
This mid-price compilation of all the songs from the last three singles will be released all over Europe on October 4th. The track listing is "Space" "O.U." "Babies" "Styloroc" "Razzmatazz" "Sheffield Sex City" "Stacks" "Inside Susan" "59 Lyndhurst Grove". There are no extra tracks so you don't have to buy it if you have the singles already. We are releasing it to introduce the whole world to Pulp as most people had difficulties in obtaining these records in the past. Foreign fans will be particularly pleased to hear that all the lyrics are included in the sleeve. This album will be released in all formats and the UK catalogue numbers are IMCD159 (CD) ILPM2O76 (LP) ICM2O76 (MC).

LIP GLOSS - NEW SINGLE IN NOVEMBER !!
Currently scheduled for release on November 15th, is the new single from Pulp...it's called "Lip Gloss" and is sure to storm the charts ! On the b-side you'll find "Deep Fried In Kelvin", a new musical odyssey based in the band's home city, plus an extra track which may be "You're A Nightmare" from this year's John Peel Session. The single will also be available all over Europe, and the UK catalogue numbers are IS567 (7") 12IS567 (12") CID567 (CDS).

HOLIDAYS - MICHEL POLNAREFF TRIBUTE
One other Pulp recording is ready for release - a song by french pop star Michel Polnareff called "Le Roi Des Fourmis", which will appear on an LP of Polnareff tunes played by other artists. The album "Holidays" will be released by Sony Music in late 93 or early 1994. The Pulp track was recorded in Sheffield with producer Stephen Street, and features Jarvis singing the original french lyrics ! He originally got a translation into English, but that made the title "The King Of The Ants" and the whole thing didn't seem to make much sense. Other songs have been covered by a host of international celebrities such as Nick Cave, St Etienne, and the Residents.

FUTURE RECORD PLANS
It's never easy to predict release dates for the future, but if all goes to plan, there'll be a second new single around February, to be followed by the new LP in March. Recording for the LP is ongoing and it should be completed by the end of the year. Just now, the group have the difficult task of choosing a shortlist from all the new, and old unreleased songs. You'll have your first chance to hear some new tunes on the upcoming tour.

LIVE SHOWS IN NOVEMBER
The Pulp touring party hopes to be visiting your town next month. Here are the dates and places. Keep your eye on the music press in case of any late changes.

The three dates in France form part of the "Les Inrockuptibles" festival, and the shows will also feature Teenage Fan Club and The Posies. Pulp will headline all the UK concerts and support for each night should come from Elastica.

TV APPEARANCES
On June 12th, Channel 4 showed Jarvis' tv debut as an actor in the short film "Carrera". I'm sorry we didn't let you know in advance, but he kept it a secret ! Jarvis played a magician called "The Great Cockerini" in the film, which was produced by Steve.

Pulp Person Emma is quite sure she saw a Pulp video on a tv screen in a BBC2 screenplay called "The Snapper" which was broadcast on April 4th ! We have no information on this, so do any of you have a video copy or a firm positive (or negative) sighting ?

It's too early to have details on tv shows to promote the "Lip Gloss" single, and Jarvis and Steve are still working on the promo video, but be sure to look out for us in all the usual places when the time comes.

I can tell you that Pulp make a cameo appearence miming to "Inside Susan on an episode of "The Sean Hughes Show" which will be broadcast by Channel 4 on November 17th.

OLD RECORDS
Two of the old singles are still available on order, and don't let the shops tell you otherwise ! They are "They Suffocate At Night (Blaze 17 - 7" Blaze 17T - 12") and "Master Of The Universe" (Blaze 21T - 12"). Both are on Fire Records, distributed in the UK by Pinnacle. "Little Girl (With Blue Eyes)" is now available on the CD compilation "Indie Scene '86" released through Castle Communications.

FAN CLUB NEWS
As I'm becoming increasingly busy with other things, more and more of the Pulp People work is being done by our new assistant Alex. Things would really be falling apart without her. She's been working on a secret special Pulp People project that we hope to make available to you all early next year. In the meantime, we are making an attempt at getting together a new issue of DISCO-VERY but I'm not going to promise anything because I'm having trouble getting the band to contribute ! They're busy with other things anyway. So if any of you have any ideas or would liKe to write or draw something then please let us Know. Anyway, isn't it about time, you were making your own Pulp fanzines and sharing our love with the world ?

A few of the last newsletters were returned to us, so does anyone know the wherabout;- of [...] ?

Last time's prize draw was won by Bob Andersen, who can now be seen out on the town in Stockport sporting the jacket from Jarvis' suit that was cut into pieces.

T-SHIRTS
At the moment, we're not able to offer t-shirts by mail as we have very few left in stock. Anyone interested in any of the old styles should write first to check exactly what we do have. By the tour, we should have a new design available. I must remind you that we can only accept cheques drawn on UK bank accounts. Whilst we do accept French Francs in cash, we cannot accept any foreign cheques.

I have also been asked to tell you about "Loaded", a french language fanzine which currently features a Pulp interview. For a copy, you should send 25Ff or £2 to Lionel Galibert [...] France.

Any fans seeking out some of the old rare Pulp records should write to Alex Ohlinger of [...] Germany, for his list of swops.

Does anyone have a spare or unwanted copy of "Dogs Are Everywhere" ? Our Alex is desperate for a copy and we can't help her at all. Write to her c/o the Pulp address.

Well that seems to be all. Hope you enjoy the new records, and we look forward to seeing you in November.