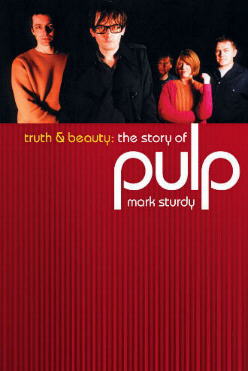 Pulp are considered by many to be one of the most innovative and popular bands of the late 20th century with top ten singles including "Common People" and "Disco 2000" and acclaimed albums including "This is Hardcore" and "We Love Life". However, their history goes back much further than that. The band was formed at school by Jarvis Cocker as far back as 1978. In the 15 years it took before the band enjoyed any success, they went through copious line-ups, bizarre stories and many records. From the late 1990s, long-time Pulp fan Mark Sturdy has been uncovering Pulp's history, speaking to members, ex-members and associates of the band, from their first ever bassist David "Fungus" Lockwood through to the people who were there for those now legendary early concerts and recordings. He also talks to Jarvis Cocker's sister Saskia and band member Nick Banks. The vast majority of people interviewed have never spoken at length to the media before and the result is an exhaustive exposition of Pulp's untold story, both before and after the band's mid '90s breakthrough.

So. What we have here is a great big book about Pulp. How is it different from all the other variously sized books about Pulp that have appeared over the years?
Well, it's different in a number of ways. Firstly, it's far more substantial than anything else ever written about Pulp - it's probably going to be something like 350 pages long. Secondly, it's (unsurprisingly given its length) far more accurate and in-depth. Whereas most of the other books were fairly perfunctory regurgitations of familiar press cuttings and fan club material with a few errors thrown in for good measure, I've done lots of original research, conducting around 30 interviews with members, ex-members and associates of the band, most of whom have never spoken to anyone before. I've also spent several very sad afternoons in Sheffield Library going through ancient local papers and digging out long-forgotten Pulp references. So there'll be a lot of things in the book that you didn't know before.

Also, my background's quite different to most of the people who've written Pulp books in the past. You do get the impression that certain ones of those books were written in a weekend by hacks who probably knock out something similar whenever they want an extra few quid for their holidays. Hence both the detail and the fact-checking suffer. The difference is that I'd been a fan for ages before starting the book, and I've tried to write the kind of book that I'd want to read myself, rather than throwing something together quickly and collecting the cheque. I'm probably quite close to the average Pulp fan (23 years old, ex-student, got into them around 'His 'n' Hers'), so hopefully it will be the kind of Pulp book that other people want to read too.

How long has it taken you to write the book?
I had the idea in 1996, started working on it seriously in summer 1997, and it's evolved gradually from then. At the time of writing (November 2002), I'm just about to finish it.

Good God, that's absolutely ridiculous. Why has it taken so long?
Well, various reasons. At first, the fact that I wasn't a professional writer (and that I was only about 17/18 years old) worked against me in that I found it difficult to get a publisher. By 1999, I'd been working on it for two years, it wasn't finished, and without a publisher there wasn't much incentive for me to get it finished, so it got put on the back burner for a while. Other things intervened over the next couple of years (I was doing a degree, and I was doing Venini's website and stuff), and it was 2001 before I got round to looking at it again. I tried my luck with publishers once more and I was lucky enough to get signed up with Omnibus Press this summer. As a result, for the past six months I've been working to a deadline for the first time ever, and it's done the trick.

Give us a few examples of the kind of thing we can expect in the book then.
Well, it's the first time there's ever been a detailed history of the band's pre-fame years. Virtually every ex-member of the band from 1978 to 1983 gets to stick their oar in, so it's basically a previously untold story from that period. The period after that, I've had help from people like Russell, Jonathan Kirk (soundman and producer of 'Freaks'), and various others who worked / toured / hung out with Pulp to get a much clearer picture of the mid - '80s era than we've had before. And on the more recent stuff, I've got extensive input from Nick, Nigel Coxon (Island Records), Suzanne Catty...

Have the band themselves had much involvement in the book?
Other than Nick and Russell, no. I spent a long, long time attempting to get interviews with the rest of the band, but it just wasn't happening. Disappointing, but there you go. However, at the last minute, I did manage to do a lengthy interview Nick, which was great, and the huge amount of Jarvis interviews that are already out there for me to borrow quotes from has meant that, on the whole, the book probably hasn't suffered too badly.

ls there anyone else you would have liked to speak to but didn't?
Pete Mansell and Magnus Doyle would have been nice, but not being able to make contact with Candida meant I couldn't get hold of them. Tim Allcard doesn't speak to journalists, and I never did manage to find Captain Sleep. Still, the huge amount of people I did get to speak to more than makes up for such things, and there's always the second edition...

How do you expect the book to be received by the world at large when it appears next Spring?
Hopefully, none of the reviews will contain the phrase "fascinating yet chilling insight into the mind of the obsessed fan." I think people will like it. It tells you a lot of interesting things about Pulp in a fairly straightforward way, so if you're interested in Pulp then it'll be just the ticket. I hope.

Any thoughts on Pulp's current winding-down of activities?
Very considerate of them to delay putting the DVD out till about a fortnight after my deadline so I can't write about it. Er, no, I do think it's a shame that we're not going to have any more Pulp in the foreseeable future, and I hope there will be more one day. On the other hand, as fans, I guess we've more than had our money's worth.